Shibori is a Japanese technique, often used in dying textiles, which involves twisting, stitching and tying fabric so that the dye creates interesting patterns. In felt making it can be used to create interesting  textures too, using the capacity of wet felt to mould and form permanent shapes as it dries.
If that makes me sound as if I know what I'm doing, don't be fooled - this is my first experiment. 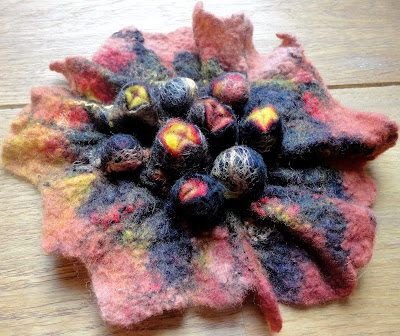 I made a roughly circular piece of felt layering different colours and finishing with some black in the centre, then some silk strands to add some shine. While still wet, I pushed some wooden beads into the back of the felt and used elastic bands to secure them in place. When the felt was completely dry, I removed the bands, popped out the beads, and found that the felt retained its "bubbles" where the beads had been, leaving the excess felt around the border prettily ruched up. I snipped some of the bubbles open so that the coloured layers were revealed. 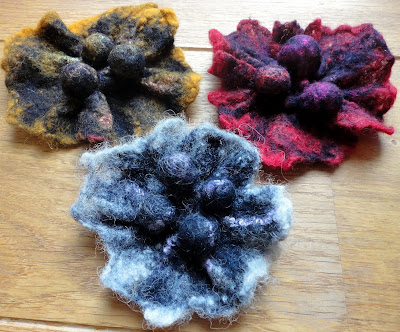 I tried this on three smaller pieces, as I thought they might make flower brooches. They are quite thin - almost transparent, at the edges, and thicker in the middle. I might add some beads in between the "bubbles". 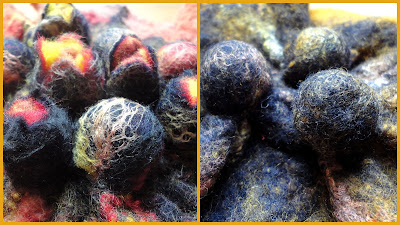 A close up view of the bubbles 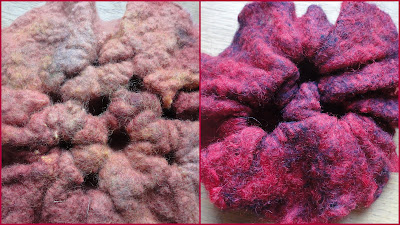 And the back view - you can see the spaces where the beads were.

Blogs that inspire me